We bring ourselves to the Christmas story.

In 1872, Christina Rossetti brought herself to the Christmas story and wrote a beautiful poem called Heaven Cannot Hold Him. You might know it as In the Bleak Midwinter.

Our God, heaven cannot hold Him
Nor earth sustain,
Heaven and earth shall flee away
When He comes to reign:
In the bleak mid-winter
A stable-place sufficed
The Lord God Almighty —
Jesus Christ.

Angels and Archangels
May have gathered there,
Cherubim and seraphim
Thronged the air;
But only His Mother
In her maiden bliss
Worshipped the Beloved
With a kiss.

We bring ourselves to the Christmas story. Where Christina Rossetti lived in England, the winter was cold and it snowed. In the time of year when Jesus was born, it wasn’t cold or snowing in the Holy Land. If so, the shepherds would not have been out in the fields with lambs and sheep.

If you ever have the chance to go to Bethlehem, I encourage you to do so. It’s a moving and complicated place. It’s not very far from Jerusalem, just a couple of miles. There’s a wall built around Bethlehem. In some places, it’s an electric fence and in others is a 26-foot-tall concrete barrier. You’re forced to pass through checkpoints with armed guards to enter and exit Bethlehem because it’s Palestinian territory. Some of Bethlehem’s residents refer to their home as the world’s largest open-air prison because their travel is severely restricted.

There’s a beautiful place, really my favorite place in Bethlehem, called The Shepherd’s Field. There’s a system of caves all over the area. When it became too cold, or when it became too dangerous, the shepherds would bring the sheep into these caves. It was a place where the shepherd could literally lie across the threshold of the cave so that sheep would be inside and trouble would be outside. The shepherds were the door, the gate. In Bethlehem, you can visit one of these caves.

When Mary and Joseph arrive in Bethlehem there’s no room in the guest room. There weren’t any hotels like there are today. There were guest rooms in homes, and they were already full because of the census.

Mary and Joseph weren’t finally offered lodging in a stable or barn. It was probably a cave. In that cave, there wasn’t a wooden manger. The place where they would put the hay or feed for the animals was usually a worn or carved spot in the rock of the cave.

After the long journey and no guest room and the bearing and the birthing, Mary and Joseph are exhausted. This is one of the reasons why I love Gari Melchers’painting of the nativity. Mary’s getting some much-needed rest and Joseph looks overwhelmed by this little, tiny, special child.

I imagine them asking the question, “What can I give him?”

What can I give him who’s God with us?

What can I give him who’s God in the flesh?

What can I give him?

How can I be the mother of God?

How can I be the foster father of God?

What can I give him?

What do I have to give? There are times in our lives when it feels very full, and we have something to give. Last year at this time, our first grandchild had just been born. I have a picture of her a couple of weeks old in front of this Christmas tree. She’s now a year old.

This year is different. My father died at the beginning of September after a decade of suffering from Alzheimer’s and then hurricane Ian hit. So many folks in our area lost everything. We had folks saying, “I wish the storm had taken me.” We had folks saying, “I never dreamed I would be starting over at this point in my life.” Months later and they’re still wrestling with contractors and permitting and insurance and trying to figure it out.

I don’t know where tonight finds you. If you are feeling full like you have much to give or if you’re feeling empty. Wherever you are, it’s okay. You’re wanted and you’re welcome.

You and those you love are welcome to worship with us in person on Sundays at 9:30 AM and 11:00 AM. You’ll also find recordings of our 9:30 AM services on YouTube.

© 2022 Lisa Ann Moss Degrenia
Leave a comment for information and permission to publish this work in any form. 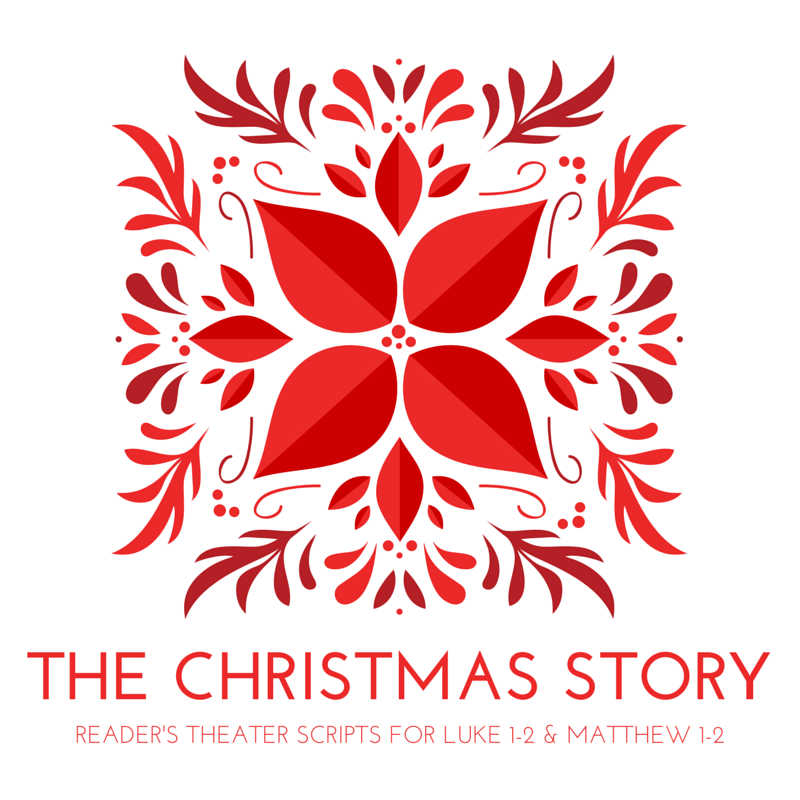 NARRATOR
In those days a decree went out from Emperor Augustus that all the world should be registered. This was the first registration and was taken while Quirinius was governor of Syria. All went to their own towns to be registered.

NARRATOR 2
Joseph also went from the town of Nazareth in Galilee to Judea, to the city of David called Bethlehem, because he was descended from the house and family of David. He went to be registered with Mary, to whom he was engaged and who was expecting a child.

NARRATOR 3
While they were there, the time came for her to deliver her child. And she gave birth to her firstborn son and wrapped him in bands of cloth, and laid him in a manger, because there was no place for them in the inn.

***************
The Christmas passages from Luke 1-2 and Matthew 1-2 are “tidings of great joy for all people.” A great way to embody this truth is through multiple readers of multiple ages voicing the beloved story. I hope these simple scripts will help you to do just that. Merry Christmas and may the promises of this Holy Season strengthen you throughout the year! – Lisa <><

Adapted from the New Revised Standard Version of the Bible, copyright 1989 by the Division of Christian Education of the National Council of Churches of Christ in the United States of America. Used by permission. All rights reserved.

Reader’s Theater: The Birth of Jesus (Luke 2:1-7) © 2014 Lisa Ann Moss Degrenia
You are welcome to use this work in a worship setting with proper attribution.
Contact the Lisa for posting and publication considerations. 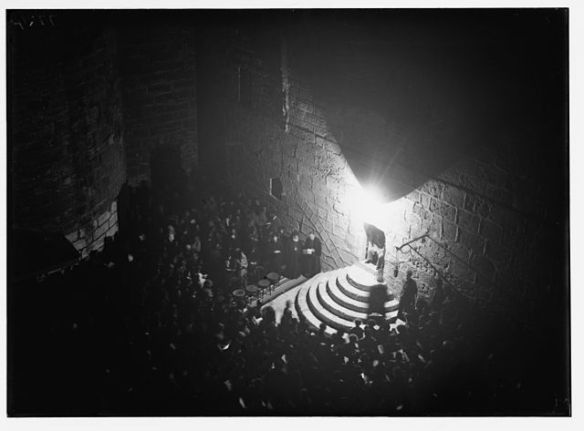 Christmas Eve service in courtyard of Church of the Nativity, circa 1934-1939. Public Domain via Wikimedia Commons

O little town of Bethlehem, how still we see thee lie!
Above thy deep and dreamless sleep the silent stars go by.
Yet in thy dark streets shineth the everlasting Light;
The hopes and fears of all the years are met in thee tonight.

We welcome you O Christ, Light of the World.
End our fears. Our hope is in you.

For Christ is born of Mary, and gathered all above,
While mortals sleep, the angels keep their watch of wondering love.
O morning stars together, proclaim the holy birth,
And praises sing to God the King, and peace to all on earth!

We welcome you O Christ, son of Mary, Son of God.
Bring peace to all on earth.

How silently, how silently, the wondrous Gift is giv’n;
So God imparts to human hearts the blessings of His Heav’n.
No ear may hear His coming, but in this world of sin,
Where meek souls will receive Him still, the dear Christ enters in.

We welcome you O Christ, Gift of Heaven.
Enter in. We receive you and pray others will as well.

O holy Child of Bethlehem, descend to us, we pray;
Cast out our sin, and enter in, be born in us today.
We hear the Christmas angels the great glad tidings tell;
O come to us, abide with us, our Lord Emmanuel!

Conclude with “Amen” or The Lord’s Prayer

***********
This worship resource may be voiced in several different ways.
Here are a couple of ideas:

Another option is to speak the hymn text rather than sing it:

If you choose to speak the hymn and prayers, it would be especially beautiful with an instrumental version of the hymn playing in the background.

Feel free to extend the prayer time between the verses for additional intercessions offered silently or aloud.

Whatever you decide, I pray this idea sparks a meaningful and rich time of worship for you this holy season. – Lisa <><

*************
O Little Town of Bethlehem prayers and compilation © 2010 Lisa Ann Moss Degrenia
You are welcome to use this work in a worship setting with proper attribution.
Please contact Lisa for information and permission to publish this work in any form.

For more information on the art and the use of this post in other settings,
please refer to the copyright information page.

The word “innocent” from its Latin root means “not wounded.” That’s how we all start life. We’re all innocent. It doesn’t have anything to do with moral right or wrong. It has to do with not being wounded yet. We start unwounded. We start innocent, but the killing of our holy innocence by power and abuse (as in the killing of the Holy Innocents by Herod [Matthew 2:1-23]) is an archetypal image of what eventually happens to all of us.
– Richard Rohr

There was another night in Bethlehem. No angel chorus was heard that evening. No Gloria in excelsis. The air that night was rent with shrieks–shrieks and cries; sobs and tears. A hellish horde had done the bidding–the bidding of a paranoid devil. These thugs search –not for life– but to deal out death. And newborn babes lie bundled in grave cloths–laid to rest–cradled in fresh-turned earth. None to save them; so that the streets of Bethlehem echo– Miserere, miserere!
– James T. Dennison, Jr. in Kerux: The Online Journal of Biblical Theology

End the Madness
by Lisa Ann Moss Degrenia
Hear our cry! Hear our cry!
Death is at the door
Evil is taking the day

Come quickly. Come in power.
Rescue your beloved.
Lord, where else shall we go?

For information on The Story of Christmas Reading Plan, click here

End the Madness © 2010 Lisa Ann Moss Degrenia
You are welcome to use this work in a worship setting with proper attribution.
Please contact Lisa for information and permission to publish this work in any form.

For more information on the art and the use of this post in other settings,
please refer to the copyright information page.