Message 3 of 5: Five Barley Loaves- Community and Social Distancing
Scriptures: John 6:1-15
Notes from a message offered Sunday, 3/15/2020 via Facebook Live for Trinity United Methodist Church, Sarasota Florida. Click Here for a video of me leading worship from my home office, including the message which starts at the 26-minute mark.

John 6:1-15
1 Jesus went to the other side of the Sea of Galilee, also called the Sea of Tiberias.

The Sea of Galilee is actually a lake. You can see the other side of the lake no matter where you’re standing. It goes by many names in the Gospels, so if you’re confused, no worries. It’s confusing.

2 A large crowd kept following him, because they saw the signs that he was doing for the sick. 3 Jesus went up the mountain and sat down there with his disciples. 4 Now the Passover, the festival of the Jews, was near.

In the previous messages, we’ve spoken about the Passover- freedom from slavery in Egypt, unleavened bread (Matzo), manna in the wilderness- so this may seem familiar.

5 When he looked up and saw a large crowd coming toward him, Jesus said to Philip, “Where are we to buy bread for these people to eat?” 6 He said this to test him, for he himself knew what he was going to do.

In the Gospel of John, Jesus always knows what he’s going to do!

7 Philip answered him, “Six months’ wages would not buy enough bread for each of them to get a little.” 8 One of his disciples, Andrew, Simon Peter’s brother, said to him, 9 “There is a boy here who has five barley loaves and two fish. But what are they among so many people?” 10 Jesus said, “Make the people sit down.” Now there was a great deal of grass in the place; so they sat down, about five thousand in all.

This time of year, in March before the Passover, Galilee is beautiful. It’s lush with green with grass. There are yellow and red wildflowers. You can imagine the sheep grazing in the grass. Jesus is gathering the people like flocks of sheep in order to feed them.

11 Then Jesus took the loaves, and when he had given thanks, he distributed them to those who were seated; so also the fish, as much as they wanted. 12 When they were satisfied, he told his disciples, “Gather up the fragments left over, so that nothing may be lost.” 13 So they gathered them up, and from the fragments of the five barley loaves, left by those who had eaten, they filled twelve baskets.

14 When the people saw the sign that he had done, they began to say, “This is indeed the prophet who is to come into the world.”15 When Jesus realized that they were about to come and take him by force to make him king, he withdrew again to the mountain by himself.

Last Wednesday feels like the tipping point in the pandemic

And the hits just kept on coming. All our common rituals and rhythms disrupted.

Then the hits got closer to home.

I spoke with a friend in Seattle online. She said, “Greetings from Ground Zero.” Their schools are closed for at least 6 weeks.

That started me lamenting-

It just ripples. Imagine dropping a pebble in a calm pool and watching the rings as they expand.

The world is having this big ah-ha moment on how interconnected we are, how interdependent we are on one another. We’re having it. I’m having it.

I was watching something on TV last week which was filmed a while ago. There was this big crowd of people laughing and enjoying being together. Then they started hugging and holding on to one another. I literally gasped. They were touching.

I’m missing touching. Will we ever be like that again or will social distancing and elbow bumps be our new norm?

Little things matter- Gathering for worship, having a face to face conversation, handshakes, and hugs

They matter because community matters.- It’s little, as intimate as a touch. But it’s also big- big as the world.

Community is tied to the word common. Common is usual, ordinary. The common good, common ground, the customary blessing of having one another.

It is a good gift from God. We as Christians believe God is One, and yet God is three. God is community. It’s in the fabric of creation, of God, of us.

As we think about John 6, there are 50 sermons, 100 sermons. But all I can see today is the community. Five thousand people gathering. Where can we do that these days?

Jesus asks how they’re going to feed all the people. I’ve preached in the past about this young boy comes forward and generously offers his lunch. He isn’t offering his lunch. He’s offering the groceries for his family. Five barley loaves and two fish. 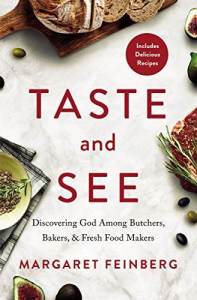 This sermon series is based on a fantastic book by Margaret Feinberg entitled Taste and See: Discovering God Among Butchers, Bakers, and Fresh Food Makers.

I highly recommend it to you. Its foodies and recipes meet travelogue meets Bible study. She looks at the Bible through the food of the Bible. She’s the one who opened my eyes to the truth of the community it takes to bring a loaf of bread from seed to your table.

“In ancient Israel, the whole family shared the hard labor. The work began in a field, plowing the soil and planting last year’s kernels. Together, the family tended the field and prayed away famine and pests, in hope the stalks would sprout, lengthen, and yield a bounty of food.

The family endured sunburn and sweat, aching muscles and strained backs, to harvest the grain with sickles. When the yield was at hand, the work had just begun. Then they must pound and winnow (blow air) through the grain to remove the outer husk. Those who couldn’t afford access to a mill used their own mortar and pestle to grind their grain.

Since the harvest had to carry the family through an entire year, only a small scoop of the flour was mixed with water and kneaded in a bread trough, while the bulk of the flour was safely stored away. The dough was then taken to the oven—but not a family oven. Most families couldn’t afford their own stove. Instead, they used a communal oven.”

Someone asked if we were canceling church events because we were afraid. It’s a reasonable question. There are many folks who are afraid right now. I recognize that truth. It’s a reasonable fear about a very dangerous virus, especially if you’re in a high-risk portion of the population.

The reason we canceled all our church events is not because we’re afraid. We’re canceling because we care. We’re willing to disrupt our lives, learn new things, and do things in a different way because we believe it will save lives.

What you are doing is not a small thing. You are saving lives.

We believe in a Mighty God and we pray mighty prayers. We believe we should love the Lord our God with all our heart, soul, mind and strength. But there’s an and to that. And we should love your neighbor as yourself. Social distancing is faith and action.

Brainstorm: How can we build and bless our community in this time of social distancing? You’ve got cell phones, computers, Instagram, and Facebook. Be creative.

I challenge you right now to call five friends just to check-in. “I’m thinking about you. I’m praying for you. You’re not alone.” If you’re tech-savvy, make it a video call.

Just like this little child, like the disciples, our job is to do our part and to remember our part is part of a greater whole. Give of your resources and give of yourself without embarrassment, worry, or shame. Give generously. Give joyfully.

We give what we have no matter how small it may seem trusting Jesus to bless it and multiply it for the common good, for the community.

********************
Social Distancing, Community, and Five Barley Loaves © 2020 Lisa Ann Moss Degrenia
Leave a comment for information and permission to publish this work in any form.