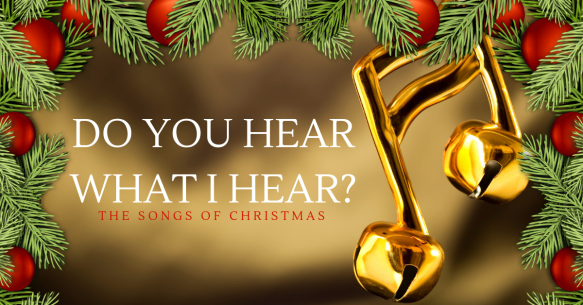 Do You Hear What I Hear? The Songs of Christmas
December 21: I Heard the Bells on Christmas Day by Henry Wadsworth Longfellow
Scripture: Luke 2:8-14; John 14:27
These are the notes from a message offered Christmas Eve, 12/24/18 at Trinity United Methodist Church, Sarasota Florida.

Christmas Bells by Henry Wadsworth Longfellow
I heard the bells on Christmas Day
Their old, familiar carols play,
and wild and sweet the words repeat
Of peace on earth, good-will to men!

And thought how, as the day had come,
The belfries of all Christendom
Had rolled along the unbroken song
Of peace on earth, good-will to men!

Till ringing, singing on its way,
The world revolved from night to day,
A voice, a chime, a chant sublime
Of peace on earth, good-will to men!

Then from each black, accursed mouth
The cannon thundered in the South,
And with the sound the carols drowned
Of peace on earth, good-will to men!

It was as if an earthquake rent
The hearth-stones of a continent,
And made forlorn the households born
Of peace on earth, good-will to men!

Maybe you’ve experienced some personal tragedy as well. Maybe you are feeling the same way as Longfellow

Longfellow’s Painful Culture
• Longfellow wrote this at the height of the civil war, no end in sight
• Neighbor slaughtering neighbor in each other’s backyards
• Written only a few months after the battle of Gettysburg (46,000-51,000 casualties)

Maybe this Christmas you are feeling hate is strong in our time as well. Maybe you are carrying the weight of our divisiveness and brokenness as a nation. Maybe it’s hard to sing Joy to the World this year.

It was hard back when Jesus was born, too. There was the Roman occupation. The people were oppressed. Mary and Joseph had personal troubles. They were forced to travel while Mary was “great with child.” When they arrived in Bethlehem there was no room to be found. Jesus is born in the midst of animals. There is no crib. He’s laid in a manger. There is no peace on earth.

And yet what do the angels sing? “Glory to God in the highest heaven, and peace on earth peace, goodwill! God favors you!”

Mary heard it- God favors you. The shepherds, the bottom of the social order of the day, heard it from the angels- God favors you. Over and over again the scriptures tell us you are beloved, you are known.

God came back then in Bethlehem. God came that Christmas when Longfellow was struggling to hold on to his faith. God comes for us, now. Whether we are joyful and celebrating. Whether we are heartbroken and facing another medical treatment. Whether we are broken and sobbing over the destruction of homes or the building of dividing walls between all of us. God comes.

There’s another stanza of this poem:

Then pealed the bells more loud and deep:
“God is not dead, nor doth He sleep;
The Wrong shall fail, the Right prevail,
With peace on earth, good-will to men.”

Generation after generation is tempted to loneliness and division and shame and hopelessness. But again and again, the bell rings out, the song is sung, “Peace on earth goodwill to men.”

John 14:27
Peace I leave with you, My peace I give to you
I do not give to you as the world gives
Do not let your hearts be troubled
Do not let them be afraid

Peace be with you.

The Christmas Story is full of singing. Mary sings. Zechariah sings. Simeon sings. The angels sing. Over the centuries we’ve continued to celebrate with songs of our own, songs born from the joy of Christ’s coming.

This holy season, to prepare our hearts again for the coming of Christ, we’ll reflect on the poetry of these meaningful songs. Some will be old friends. Others will be new. My prayer is that their beauty and power draw us closer to Jesus, the babe of Bethlehem, the Risen King. And that the grace of drawing near fulfills in us Christ’s power of new life.

Suggestions for Reflection on Each Song Lyric in the Christmas Devotion:

I look forward to hearing your comments. – Lisa <

************
Hark! The Herald Angels Sing © 2018 Lisa Ann Moss Degrenia
Leave a comment for information and permission to publish this work in any form.