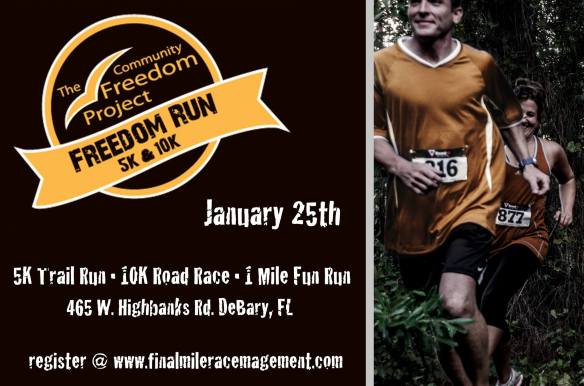 The thought behind the photo:
My friend Nicole Sallee has a passion to bring awareness and healing to the victims of human trafficking. Her ultimate goal is to build a safe house in central Florida. I am humbled and inspired by her dedication, vision and trust in God to bring it to pass. When I think of freedom, I think of her and the many ways she’s following God’s call to give victims a voice and a future with hope.

Click here to register for The Community Freedom Project’s next event, The Freedom Run. The 5K is a trail race consisting of two laps around the Community UMC DeBary new campus property and the 10K run will be an out and back course along Ft. Florida Road. Both events will be chip timed. The 5K trail run will be part of the Spring Final Mile Grand Prix Series.

Not a runner? Walkers are welcome! Volunteers are also needed the day of the race. Contact the church office to register to volunteer cumc@cumcdebary.org

SCRIPTURE: Isaiah 61:1-4 NRSV
The spirit of the Lord God is upon me, because the Lord has anointed me; he has sent me to bring good news to the oppressed, to bind up the brokenhearted, to proclaim liberty to the captives, and release to the prisoners; to proclaim the year of the Lord’s favor, and the day of vengeance of our God; to comfort all who mourn; to provide for those who mourn in Zion— to give them a garland instead of ashes, the oil of gladness instead of mourning, the mantle of praise instead of a faint spirit. They will be called oaks of righteousness, the planting of the Lord, to display his glory. They shall build up the ancient ruins, they shall raise up the former devastations; they shall repair the ruined cities, the devastations of many generations.

The December 17, 2013 devotion from http://umrethinkchurch.tumblr.com
SCRIPTURE: Psalm 146:5-10, NRSV
Happy are those whose help is the God of Jacob, whose hope is in the LORD their God, who made heaven and earth, the sea, and all that is in them; who keeps faith forever; who executes justice for the oppressed; who gives food to the hungry. The LORD sets the prisoners free; the LORD opens the eyes of the blind. The LORD lifts up those who are bowed down; the LORD loves the righteous. The LORD watches over the strangers; he upholds the orphan and the widow, but the way of the wicked he brings to ruin. The LORD will reign forever, your God, O Zion, for all generations. Praise the LORD!

In a speech at the conclusion of a march from Selma to Montgomery, in Alabama, on March 25, 1965, the Reverend Doctor Martin Luther King Junior concluded his speech with the following:

“Not long” was King’s response, again and again.

In this season of Advent, we are still asking the same question: How long?

Take courage and hope in the promise that God “who made heaven and earth, the sea, and all that is in them; who keeps faith forever” is the same God who will deliver all of those things that were promised in the verses above.

How can each one of us be a part of the liberation God is already doing?

Thank you Rethink Church for a great way to make preparing for Christmas more meaningful. Join me and thousands more in setting aside time to reflect, focus, and literally picture the deep themes of Jesus’ birth.