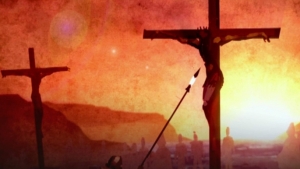 John 19:31-34 (NRSV)
Since it was the day of Preparation, the Jews did not want the bodies left on the cross during the sabbath, especially because that sabbath was a day of great solemnity. So they asked Pilate to have the legs of the crucified men broken and the bodies removed. Then the soldiers came and broke the legs of the first and of the other who had been crucified with him. But when they came to Jesus and saw that he was already dead, they did not break his legs. Instead, one of the soldiers pierced his side with a spear, and at once blood and water came out.

Extended quote from Dancing Standing Still: Healing the World from a Place of Prayer by Richard Rohr
The significance of Jesus’ wounded body is his deliberate and conscious holding of the pain of the world and refusing to send it elsewhere. The wounds were not necessary to convince God that we were lovable; the wounds are to convince us of the path and the price of transformation. They are what will happen to you if you face and hold sin in compassion instead of projecting it in hatred.

Jesus’ wounded body is an icon for what we are all doing to one another and to the world. Jesus’ resurrected body is an icon of God’s response to our crucifixions. The two images contain the whole message of the Gospel.

A naked, bleeding, wounded, crucified man is the most unlikely image for God, a most illogical image for Omnipotence (which is most peoples’ natural image of God). Apparently, we have got God all wrong! Jesus is revealing a very central problem for religion, by coming into the world in this most unexpected and even unwanted way. The cross of Jesus was a mirror held up to history, so we could utterly change our normal image of God.

John 20:19-20 (NRSV)
When it was evening on that day, the first day of the week, and the doors of the house where the disciples had met were locked for fear of the Jews, Jesus came and stood among them and said, “Peace be with you.” After he said this, he showed them his hands and his side. Then the disciples rejoiced when they saw the Lord.

Maybe some of our scars won’t follow us into resurrection, I don’t know. But Jesus had scars on his resurrected body. On his hands, on his feet, on his sides. Scars that proved that he lived, and that he loved. Scars that remind me of who he is and how he loves. He let Thomas touch them. Maybe someday he’ll let me touch them.
– Jordyn Osburn, I have stretch marks

The Lord showed his wounds to convince them beyond a doubt that it was not a fantasy or an apparition. A week later he shows his wounds to Thomas. The resurrected body still bore these proofs of his suffering and love. Sixty years later, when John, at Patmos, saw the Lion of the Tribe of Judah, he beheld “a Lamb as it had been slain.” Perhaps our Lord in glory continues to bear the marks of the cross. Perhaps these will forever, as we gaze in glory, remind us of the story of our redemption. – B. W. Johnson

Rather than Thomas should suffer from unbelief, Christ will let him take great liberties. Our Lord does not always act towards us according to his own dignity, but according to our necessity; and if we really are so weak that nothing will do but thrusting a hand into his side, he will let us do it. Nor do I wonder at this: if, for our sakes, he suffered a spear to be thrust there, he may well permit a hand to follow. – Charles Haddon Spurgeon, The Evidence of Our Lord’s Wounds

Caravaggio’s painting illumines a point that the Gospel writers are keen to make in the post-resurrection stories of Jesus. They want to make sure we know that the risen Christ was no ghost, no ethereal spirit. He was flesh and blood. He ate. He still, as Thomas discovered, wore the wounds of crucifixion. That Christ’s flesh remained broken, even in his resurrection, serves as a powerful reminder that his intimate familiarity and solidarity with our human condition did not end with his death. Perhaps that’s what strikes me so about Caravaggio’s painting: it stuns the viewer with the awareness of how deeply Christ was, and is, joined with us. The wounds of the risen Christ are not a prison: they are a passage. – Jan Richardson, The Painted Prayerbook

Our scars tell part of the story of who we are, what has mattered to us, what has happened to us, the risks we’ve taken, the gifts we’ve given.  And as we are reminded in the story before us in John’s Gospel, this was surely also so with Jesus, too. Which is why Thomas insisted he needed to see, no more than that, feel the scars in his hands and put his own hand in Jesus’ side to be sure that it was him.  One would think he would have recognized him with from the features of his face or the sound of his voice, but no, for Thomas, Jesus had become something more since that long walk to the cross a week before.  Jesus’ very identity was now defined by the sacrifice he had made in our behalf.  A sacrifice made most visible in those wounds that by then could have only begun to heal. – Janet H. Hunt, Scars and Stories, Doubt and Faith

Isaiah 53:5 (NLT)
He was wounded and crushed for our sins.
He was beaten that we might have peace.
He was whipped, and we were healed!

Only in the context of grace can we face our sin; only in the place of healing do we dare to show our wounds; only with a single-minded attention to Christ can we give up our clinging fears and face our own true nature. – Henri Nouwen, The Way of the Heart

Jesus invites each one of us, through Thomas, to touch not only his wounds, but those wounds in others and in ourselves, wounds that can make us hate others and ourselves and can be a sign of separation and division. These wounds will be transformed into a sign of forgiveness through the love of Jesus and will bring people together in love. These wounds reveal that we need each other. These wounds become the place of mutual compassion, of indwelling and of thanksgiving. We, too, will show our wounds when we are with him in the kingdom, revealing our brokenness and the healing power of Jesus. – Jean Vanier, Drawn into the Mystery of Jesus through the Gospel of John

Our wounds and scares become the icons of grace. – Paul Young

With a kindly countenance our good Lord looked in to his side, and he gazed with joy, and with his sweet regard he drew his creature’s understanding into his side by the same wound; and there he revealed a fair and delectable place, large enough for all mankind that will be saved and will rest in peace and in love. -Julian of Norwich

The Anima Christi is a medieval prayer to Jesus in the tradition of the Roman Catholic Church. This translation is by Cardinal John Henry Newman.
Soul of Christ, be my sanctification
Body of Christ, be my salvation
Blood of Christ, fill all my veins
Water of Christ’s side, wash out my stains
Passion of Christ, my comfort be
O good Jesus, listen to me
In Thy wounds I fain would hide
Ne’er to be parted from Thy side
Guard me, should the foe assail me
Call me when my life shall fail me
Bid me come to Thee above
With Thy saints to sing Thy love
World without end. Amen.

———————
Click here, for Steve Garnaas-Holmes meaningful prayer on Thomas’ encounter with the Risen Christ entitled A Prayer to St. Thomas. Also consider his posts entitled, Thomas’ Prayer and The Mark of the Nails.

For another devotion and an original poem entitled The Taste of Death, click here

For another devotion and an original poem entitled You Understand my Pain, click here

1 thought on “The Wounds of Christ”